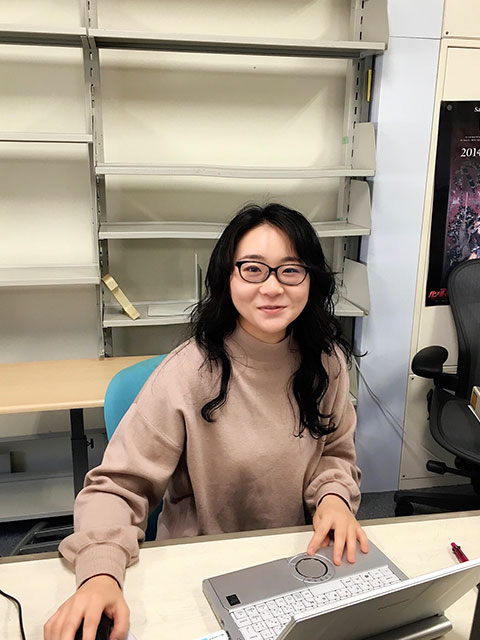 To act as a force that links musicians and society

What was the impetus for selecting this university department as your major ?

I have specialized in the study of the piano since early childhood. When I was choosing which university I wanted to go to, my piano teacher advised that I should “study the field of music extensively.” As a result, based on the fact that I could study both music education and the practice of music, I entered the Music Art, Sports and Culture program in the Education Department of Tokyo Gakugei University. After entering this program, I took classes in the theory and practice of education as well as lessons in musical instrument skills, and gained both knowledge and skills related to the practice of music, such as singing, chorus, ensemble, piano accompaniment, conducting, composition, music theory, and musicology. I was interested in modern and contemporary music and advanced to the master’s degree course, where I conducted research into performances of the works of Bela Bartók (1881-1945). Bartók was a Hungarian composer and an excellent pianist who placed highly in a global piano competition. He was also a scholar of ethnic music, and he took a phonograph—which had just begun to be widely available—to a rural village in what was then the Kingdom of Hungary in order to collect the folk songs of the locals with whom he stayed with. Thus, many of Bartók’s compositions tended to include ethnic elements. Although there were many composers before Bartók who included ethnic elements in their works, Bartók was quite different from his predecessors. Specifically, many composers expressed ethnic elements in their music by directly quoting and imitating the rhythms of ethnic music. In contrast, rather than directly quoting and imitating the rhythms of ethnic music, Bartók expressed the sounds of life and the behaviors of the residents in the rural villages he visited in unique harmonies and rhythms, and in doing so he established his own musical language. This unique musical language was far removed from the conventional rules of Western music, and it led to the contemporary musical idea that music is to be created without adhering to conventional, traditional forms. 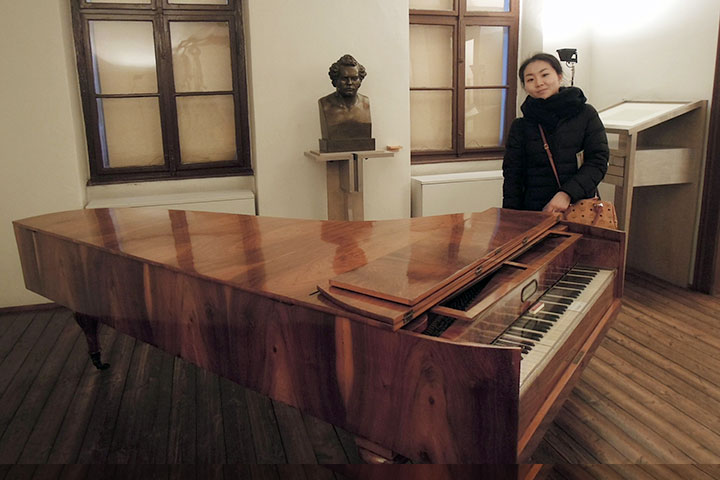 Studying in University of Music and Performing Arts Vienna, 2014
Bartók was a musician who continued to pursue music from three perspectives: as a composer, a performer, and a scholar. The musical works that he composed based on his elaborate musical language have great appeal to me, and it is for this reason that I studied the performances of his works. This is the origin of my interest in contemporary music and the starting point of my current PhD studies.

At first, my objective of studying the performances of Bartók’s works was to obtain a Doctor of Musical Arts (DMA) degree. This did not go well, however, and while I was agonizing over what to do next, I learned of the establishment of the joint sustainability major. Although research related to modern music, including Bartók, has been done in the field of musicology, there has been little research that has included interdisciplinary ideas, which is the distinguishing feature of joint sustainability studies. It was for this reason that I was intrigued by the program. Although I was anxious that this would be a difficult path to take, I was encouraged by those around me, and I decided to take the exam. 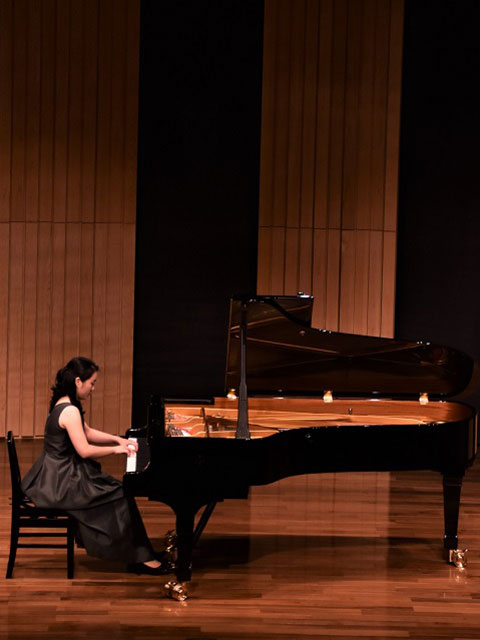 Piano concert by students of Prof. Reiko Matsuzaki in 2019

What issues are you currently researching ?

Currently, I am taking advantage of what I learned about music by studying it previously from the two abovementioned perspectives as I conduct a quantitative study in which I am assessing music education policy with a focus on the practice of musical composition in Japanese elementary schools. The music learning theory known as “creative music making” was introduced in the Elementary School Curriculum Guidelines that were released in 1989. This is a music learning theory created in the 1970s in Europe and the US that was based on the principles of contemporary music. Music education in Japan prior to that time leaned toward teacher-led technical guidance in singing, playing musical instruments, and gaining other skills. Thus, there were problems related to the children’s own initiative and creativity. The concept of contemporary music that is expressed in creative music making as “make music without regard for the pre-existing rules of Western music” introduced a clue that could be used to solve the problems that existed in music education at the time. It presented a novel music education concept that could be utilized in the future. However, today—30 years after the introduction of creative music making—classes in music making in educational settings are being conducted less frequently than classes in singing and musical instrument playing. Many of the teachers who are enthusiastically providing music making education grapple with the difficulties of teaching musical composition. I am studying the causes of these difficulties and exploring ways that can be utilized to alleviate them. 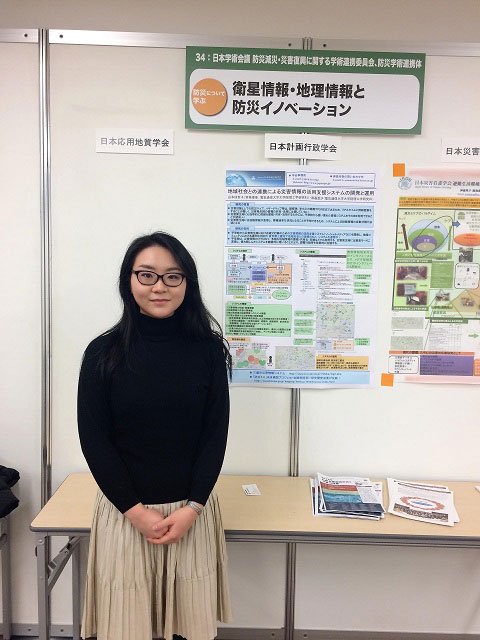 Although the idea remains vague, I would like to act as a force that links musicians and society. I have met many people in the world of music, such as performers and composers, and I have learned about the essence of music from their performances and compositions. When I look at contemporary Japanese society, I feel that music is used as nothing more than a tool, and that there are almost no initiatives designed to take advantage of the essence of music. In order to take advantage of the essence of music, I believe it is necessary to create a society that takes advantage of musicians’ perspectives and ideas. I would like to continue performing and researching so that I can assist in realizing a world in which the perspectives and ideas of musicians are thoroughly utilized.

Back PageTop
We use cookies to ensure that we give you the best experience on our website.
Accept AllRead More
Manage consent

This website uses cookies to improve your experience while you navigate through the website. Out of these, the cookies that are categorized as necessary are stored on your browser as they are essential for the working of basic functionalities of the website. We also use third-party cookies that help us analyze and understand how you use this website. These cookies will be stored in your browser only with your consent. You also have the option to opt-out of these cookies. But opting out of some of these cookies may affect your browsing experience.
Necessary Always Enabled
Necessary cookies are absolutely essential for the website to function properly. These cookies ensure basic functionalities and security features of the website, anonymously.
Functional
Functional cookies help to perform certain functionalities like sharing the content of the website on social media platforms, collect feedbacks, and other third-party features.
Performance
Performance cookies are used to understand and analyze the key performance indexes of the website which helps in delivering a better user experience for the visitors.
Analytics
Analytical cookies are used to understand how visitors interact with the website. These cookies help provide information on metrics the number of visitors, bounce rate, traffic source, etc.
Advertisement
Advertisement cookies are used to provide visitors with relevant ads and marketing campaigns. These cookies track visitors across websites and collect information to provide customized ads.
Others
Other uncategorized cookies are those that are being analyzed and have not been classified into a category as yet.
SAVE & ACCEPT